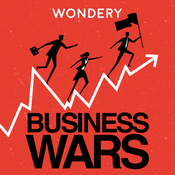 sur
Wondery presents The School of Greatness
The School of Greatness with Lewis Howes is the best place to learn how to dream bigger, live better, and make an impact.&nbsp; The show features conversations with world-class game changers, and dives into topics from entrepreneurship and inspiration, to health and relationships. Subscribe today at:&nbsp;
Encore: Nintendo vs Sony - No Surrender | 6
After years of sitting on the sidelines of the next-generation console war, Nintendo is finally ready to make its move. But, the years it’s spent building it’s reassuring family-friendly reputation is now a weakness. Nintendo children of the 80s are all grown up, and want adult games. Sony is able to release edgier fare like Grand Theft Auto and Tomb Raider. The half-decade cold war between Sony and Nintendo is about to turn hot. Their next head-to-head battle is a multi-billion dollar clash that will define the future of video games. And in the real world, just one of them can prevail. Support us by supporting our sponsors: NetSuite - Schedule your free demo right now - and receive their FREE guide – “Seven Key Strategies to Grow Your Profits” at .
Encore: Nintendo vs Sony - The Sleeping Giant | 5
Nintendo decided early on that the Nintendo 64 would be a cartridge console, instead of a CD console. But CDs are much cheaper to make and have much better graphics. Game companies are upset, and defect to Sony. In a few months time, Sony has two of the most popular game series in Japan to itself. Nintendo will now have to make its own games that are strong enough to outsell PlayStation. It’s Nintendo vs the world. They’re taking a huge gamble, and this is not a game. Support us by supporting our sponsors: Avalara - Avalara is tax compliance done right. Find out more at avalara.com/bw.
Encore: Nintendo vs Sony - Game Time | 4
This is a story about Sony and Nintendo, but it also involves a little company called Sega. Ever play Sonic the Hedgehog? That’s Sega. And during Nintendo’s domination of the US market, they were the only company able to fight back. That is, until they tried to outplay Sony. Support us by supporting our sponsors: Fivver - Check out and you’ll get 10% off your first order when you use the code, BW.
Encore: Nintendo vs Sony - Charm Offensive | 3
From the moment it began, the PlayStation project was in danger. The problem was none other than PlayStations knight and chief advocate: Kutaragi. He thought the now-iconic handlebar controller design was “too different” from the flat rectangles people were used to. To make matters worse, PlayStation was getting closer and closer to launching without any games… a console with no games? Good luck with the PlayStation now, Sony. They were in trouble. And Nintendo knew it. Support us by supporting our sponsors! ZipRecruiter - Try ZipRecruiter FOR FREE at our web address: Betterment - Betterment can help you make sense of what to do with your money. Download the app today.
Afficher plus