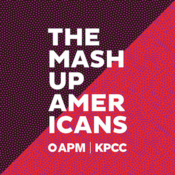 sur
Mash-Up Live: Food Makes Us Happy (& Other Stories)
Live Show from Chicago! We were with a sold out crowd in Chicago talking food and laughing our faces off, as a part of WBEZ's Podcast Passport Series. You'll hear our convo with two guest chefs - Jennifer Kim and Diana Davila - for an interview about using their midwestern roots to explore the foods their parents shared with them. You'll also hear a fantastic set from the hilarious comic Alex Kumin on everything from body hair to the complexities of the American healthcare system. Thanks to WBEZ's Podcast Passport Series and Sleeping Village for making this night happen.
Fatimah Asghar on Our Unseen Identities
Poet and screenwriter Fatimah Asghar is talking to us about&nbsp;why "orphan" is the identifier she relates to the most, and why her idea of home isn't a physical place. Fatimah is having a moment right now….within the past year, the web series that she co-created Brown Girls got picked up by HBO, she released a collection of poetry, and she was chosen as one of Forbes 30 under 30 on their Hollywood and Entertainment list. She also shares her 3 rules of success and has really got us thinking about how we define success. If you don't know Fatimah, now you now, and you will definitely be hearing more from her in the future.
Ai-Jen Poo on How We Make It All Work
“I really believe that care and caregiving can save the soul of the country. Everybody has people that they care about. It totally connects us in this very deep, emotional way.” We agree with Ai-Jen! We had SO MUCH FUN in this conversation. The paid work of caregiving&nbsp;- which is mostly done by mashy women - makes our economy and world move. Ai-Jen Poo is the head of the National Domestic Workers Alliance and one of the organizers of Supermajority. She’s so mashy she even has a hyphen in her name! Ai-Jen tells us what it was like growing up between Taiwan and the US, and how her relationship with her grandparents meant that she never was ashamed of her mashiness. There is a direct line between her mash-up origin story and how she ended up working with domestic workers. For more details and super practical info visit
Alua Arthur On Demystifying Death
“Talking about sex won’t make you pregnant, talking about death won’t make you dead.” We are talking about death on this episode and it is a party! We are going to explore life, love, and family through the lens of death with our incredible guest Alua Arthur. Alua is a Ghanifornian Mash-Up and a death doula, which means that she works with individuals and families to help them through the process of death. We chat with Alua about everything from what to do with your loved one’s magazine subscription after they are gone to what an advanced care directive is and why we need one. She tells us about the cultural differences surrounding death and about her personal journey from being a child missionary to working as a lawyer to now working within the death industry.
Aline Brosh McKenna on Leading Ladies
Aline Brosh McKenna is a Hollywood triple threat; she’s a showrunner, director, and writer and she does them all really really well. She has worked in this business for more than two decades but her mission has remained the same: to center women’s stories around something other than a man. We talk about Cher, body hair, bacterial vaginosis, and so much more. Get ready! She’s the writer of your favorite rom coms, from 27 Dresses to The Devil Wears Prada to I Don’t Know How She Does It . Most recently she has been busy showrunning and writing Crazy Ex-Girlfriend which is now in its fourth and final season. Aline tells us what it was like growing up in the 70’s in very white suburban New Jersey with Jewish immigrant parents, and why she relates more to people with immigrant parents than other Jewish people. She tells us about the differences between being a boss in her 20’s and being a boss in her 40’s, and why she wants to write more roles for women over 50.
Afficher plus