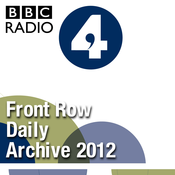 sur
Neil Young interviewed
With John Wilson. In a rare extended interview, the Canadian singer-songwriter Neil Young discusses his latest disc, a selection of traditional songs, recorded with the uninhibited rock band Crazy Horse. The album includes a version of God Save The Queen, the anthem Young recalls singing as a schoolboy in Canada. Young, who topped the album charts on both sides of the Atlantic 40 years ago with his LP Harvest, also reflects on the role of the protest song in the age of the TV talent show, and considers his own instinctive approach to music-making, and his reluctance to become a crowd-pleaser. Producer John Goudie.
Julian Fellowes, Rumer and Maureen Lipman in the Front Row Quiz
Mark Lawson turns quizmaster to test the cultural knowledge of two teams in the Front Row Quiz of the Year. Downton Abbey creator Julian Fellowes and film-maker Asif Kapadia join team captain Natalie Haynes to compete against actress Maureen Lipman and singer Rumer, under the captaincy of crime writer Mark Billingham. Questions cover a wide range of the year's events, and there's a teasing round of Nordic TV crime drama clips - in their original languages. Producer Claire Bartleet.
British actors in America
With Mark Lawson. Damian Lewis, Hugh Laurie, Thandie Newton, Adrian Lester, Clive Owen and Ashley Jensen are among the actors who discuss the highs and lows of working as British performers in America. Many high profile American TV shows and films are casting British actors in key roles. The success of programmes such as Homeland and House are testament to the strong parts tempting British actors across the pond. Director Stephen Frears explains his theory that there is a crisis in American acting, prompting producers and directors to seek talent on this side of the Atlantic. Hugh Laurie and Damian Lewis reflect on the pros and cons of the long contracts and extended seasons on prime time US TV shows and Adrian Lester and Thandie Newton explore the reasons behind the success of many black British actors in America. Producer Ellie Bury.
The creative backstage stars of Strictly, Downton and the Olympics
Kirsty Lang turns the spotlight on the backstage stars, some of the key individuals behind-the-scenes who play a key role in big events and major TV shows. The band from Strictly Come Dancing lurk at the back of the stage in the shadows as the brightly-lit action takes place on the dance floor in front of them. Band leader Dave Arch, bass player Trevor Barry and singers Haley Sanderson and Lance Ellington give us an insight into the view from the back, and what they can do when things don't quite go according to plan. Costume designer Caroline McCall is in charge of creating, sourcing, designing and hiring the wide selection of period dress for Julian Fellowes' ITV1 hit drama series Downton Abbey. She takes Kirsty round her main costume suppliers who provided the extensive high-end wardrobe for Shirley MacLaine in Series 3, and describes what it's like to see the script for the first time and find there's a big wedding, a jazz party and a trip to London, and filming starts in two weeks. And Patrick Woodroffe, lighting designer of choice for the Rolling Stones since 1982, has had a busy year lighting the Queen's Diamond Jubilee concert outside Buckingham Palace, the Stones' 50th anniversary tour, and not least the opening and closing ceremonies for the Olympics and Paralympics. He discusses the pleasures of creating a new show from scratch and the challenges that faced him when Danny Boyle described his vision for his opening ceremony - and why the big orange Olympic rings so nearly didn't light up. Producer Jerome Weatherald.
Neil Young, Pete Townshend, Mick Jagger and more on their musical roots
John Wilson talks to musicians including Keith Richards, Mick Jagger, Neil Young, Neil Diamond, Paul McCartney, Emeli Sandé, Jonny Greenwood and Pete Townshend about their first musical influences. Neil Young reveals why he recently recorded a version of God Save The Queen, the anthem he sang regularly during his Canadian childhood. Paul McCartney discusses how songs by the great American tunesmiths of the 1930s, which he heard in his childhood home, influenced his own approach to writing. Pete Townshend contrasts his love of abrasive rock and roll with the music performed by his father, who played the saxophone in a dance band. Soul singer Bobby Womack remembers how he also rebelled against his father, who wanted his sons to perform only gospel music, rather than anything more secular. Mick Jagger and Keith Richards reflect on their early shared love of raw American blues records. And Neil Diamond, Emeli Sandé and Jonny Greenwood, from the band Radiohead, recall the early musical encounters which shaped their subsequent careers. Producer John Goudie.
Afficher plus