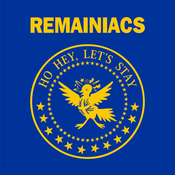 sur
Keeping The Lights On for EU citizens
(This episode recorded just before Sajid Javid got Cummingsed…) The long campaign for our EU friends and neighbours is on. As Johnson’s government breaks its promises to UK-resident EU citizens daily, MONIQUE HAWKINS of campaigning group
Order! The one with JOHN BERCOW
Clear the lobby for special guest JOHN BERCOW , the most controversial Speaker in recent history. He visits Remainiacs to talk about his time in charge of Commons at war, his new autobiography
BONUS: Our new politics podcast THE BUNKER
If there was ever a good day to try our new, no-Brexit politics podcast THE BUNKER then it’s today, Friday 31 Jan. Every Wednesday we’ll be talking about the wider world of politics with voices both familiar and new. Subscribe to THE BUNKER (or bookmark it) on… APPLE PODCASTS:
Brexit Day: Not with a bong but a whimper
Our bloody but unbowed Brexit Day edition. As Britain slopes out of the EU like an embarrassed pub drunk, Leaver triumphalism is strangely muted. Is the Brexiters’ victory is beginning to feel a little hollow? Maybe the REAL Brexit was the enemies we made along the way.&nbsp; Plus, period of reflection latest! The Labour Party sets the “
So Long And Thanks For All The Fish – plus special guest Ian Murray MP
This week: fish, food, agriculture, immigration, Scotland and our special guest, Labour’s deputy leadership candidate and only Scottish MP, IAN MURRAY . On the menu: Labour’s existential crossroads, why the party lost Scotland, the Brexit vs Corbyn blame game, and what Labour needs to do to win back Britain’s confidence. Plus: Why crossing the imaginary Brexit finish line won’t change Britain’s inevitable reckoning with the immigration issue . What use is the Government’s greenwashed Agriculture Bill when it won’t protect us from low-standard food imports? Do “Britain’s fish” really matter? And why you CAN fly your European flag after Jan 31.&nbsp; “The only consolation here is that the chlorinated chickens will come home to roost on the doorstep of Number Ten.” Presented by Ros Taylor with Alex Andreou, Ingrid Oliver and Ian Dunt. Produced by Andrew Harrison. Audio production and script by Alex Rees. Remainiacs is a Podmasters production. Remainiacs isn’t going away just because Brexit is happening. We’ll be here throughout to keep the pro-European movement informed, entertained and fired up. Get every new episode a whole day early when you back us on the&nbsp;
Afficher plus